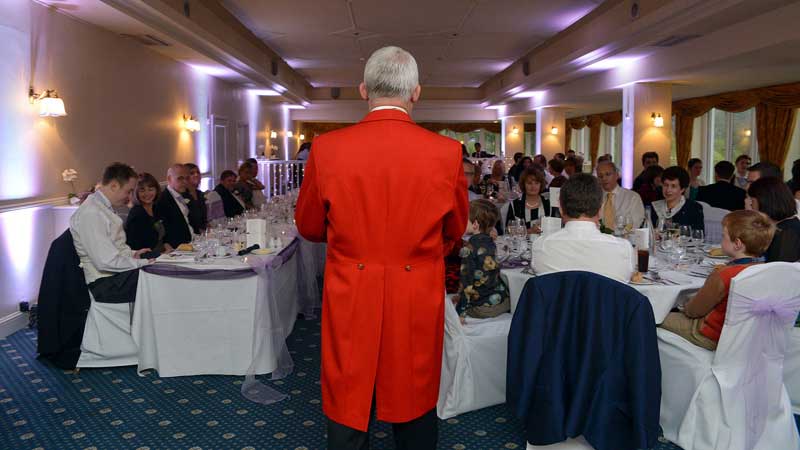 The red jacket that we wear is called 'Pink'. This is probably from the renowned tailor who designed it ,originally for hunting, whose name was 'Thomas Pink'.

Hunting was not allowed within the boundary walls of London and so Toastmasters do not wear the familiar red jacket when working within the city of London prefering to wear the black tail coat instead.

Actually has a fifth line 'and a silver sixpence for her shoe' Sixpences (2.5p) for us old enough to remember were originally made of solid silver. They would be presented to the bride by the Lord of the manor as a dowry gift. The bride would place the coin in her left shoe to symbolise wealth both monetarily and wealth in happiness. Eventually the tradition died out and the last line of the traditional poem was lost to obscurity. The silver sixpence soldiered on but became increasingly rare as it slowly became worth more melted down than its actual face value. In 1920 the silver content of a sixpence was reduced by 50% being an alloy of silver and cupronickel. Then in 1947 all silver content was removed with the lowly coin now being made up entirely of cupronickel which is an alloy of Copper and Nickel. The sixpence however has always been and continues to be a symbol of good luck, perhaps due to the fact that if you happened across a silver one in your change you were richer than you thought! The tradition of handing the bride a sixpence to hide in her shoe is gradually coming back into favour and who knows maybe the last line of the poem will see a revival as well.

Why is it called 'A Toast'?

This may originate from Roman times when a piece of toast or burnt bread was added to a glass of wine to reduce its acidity and thuse sweeten its taste. Slightly more sinister is the act of 'chinking' glasses as we toast. Again, in Roman times one of the easiest methods of removing ones enemies was to poison them, normally by adding the poison to sweetened wine. The act of knocking wine glasses together would allow some wine to spill over into the other persons glass thus proving that the wine was not poisoned.